Share on WhatsAppShare on Facebook
A class 10th student from Kolkata wrote a dialogue of Pushpa in his answer sheet The picture of the answer sheet went viral on social media. 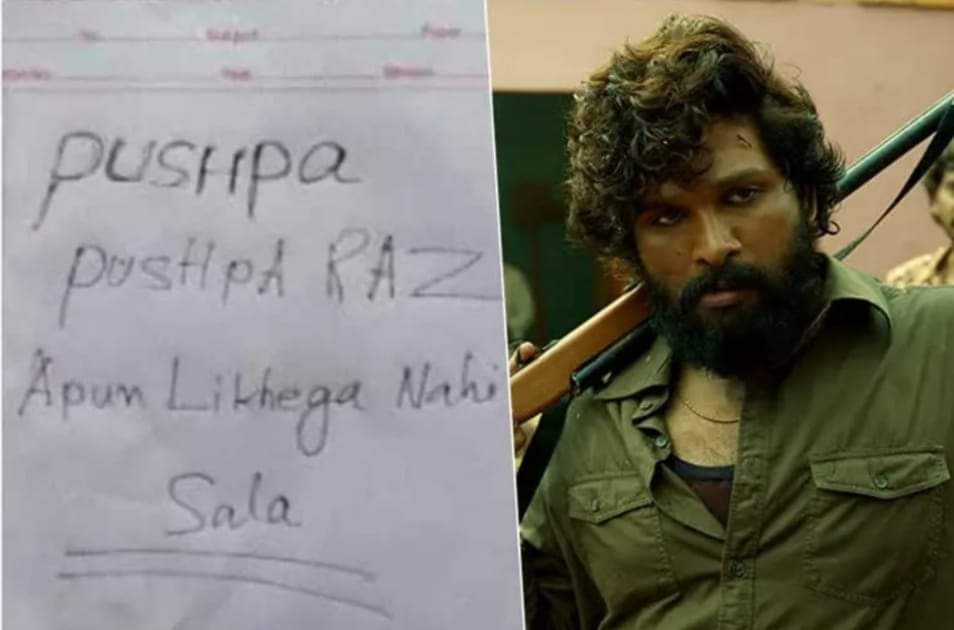 New Delhi | Jagran Entertainment Desk: Ever since Pushpa: The Rise has hit the screens, it has taken the internet by storm. The song and dialogues of the movie are all over social media. Now, the craze for Allu Arjun-starrer film took another turn when a class 10th student from Kolkata wrote a dialogue of Pushpa in his answer sheet.
The student wrote ‘Pushpa, Pushpa Raj, apun likhega nahi’ in his examination paper, and the picture of the answer sheet has gone viral on social media. The original dialogue is ‘Main Jhukega Nahi’, but this student wrote the dialogue in his own style.
The WB Madhyamik Exam 2022 for Class 10th students began on 7th March and concluded on 16th March 2022. This incident came to the light during the evaluation process of the answer sheet.
‘Main Jhukega Nahi’ is one of the most popular dialogues from Pushpa: The Rise and many memes have been made on this. Not just the audience, even many companies used this dialogue for their promotions.
The second part of the film, Pushpa: The Rule, is also in the progress. According to the reports by the news agency IANS, the musician Devi Sri Prasad has composed three songs for the sequel.
Pushpa: The Rise collected more than Rs 300 at the box office worldwide. Moreover, it also got a good response on the OTT platform. Directed by Sukumar, the movie also stars Rashmika Mandanna and Fahadh Faasil. The film revolves around Pushpa Raj, whho is a lorry driver and it is set in the backdrop of red sandalwood smuggling. (Agencies)