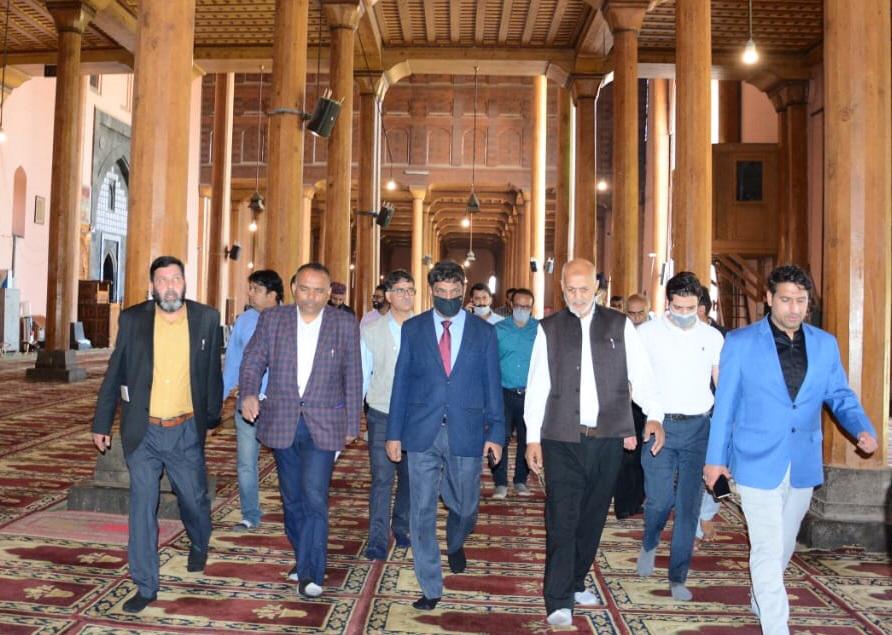 Srinagar, Apr 27 (KB): Chief Secretary, Dr Arun Kumar Mehta, today visited Dargah Hazratbal, Khanqah-e-Moula and Jamia Masjid Nowhatta in Srinagar city to review arrangements put in place for the visiting devotees there.
Chief Secretary was accompanied by Divisional Commissioner, Kashmir, Pandurang K Pole, Deputy Commissioner, Srinagar, Mohammad Aijaz, Commissioner, SMC Athar Aamir Khan, Director Tourism Kashmir, Dr GN Itoo, SSP Srinagar, Rakesh Balwal and other senior officers.
Chief Secretary exhorted upon the concerned departments to ensure all their respective tasks are accomplished with highest degree of responsibility so that devotees visiting the shrines don’t face any hardship on this account.
He interacted with Auqaf members at the shrines and enquired from them about the arrangements that have been put in place for convenience of the devotees.
During his visit to Dargah, Chief Secretary directed for upgradation of facilities there saying that all services should be put in place for convenience of devotees thronging the shrine during Laylat-ul-Qadr, Eid ul Fitr. He directed for completion of boundary wall and construction of gates in the premises.
Maintaining that collective approach is the way forward for better upkeep of shrines, Chief Secretary directed the officers to take feedback from Auqaf and locals regarding upgradation of facilities. He asked the officers to keep the stray dogs at bay by engaging dog catchers at the shrines to prevent any mishap.
He asked the SMC to ensure proper maintenance of cleanliness around the shrines especially during Ramadan as well as upcoming holy days. (Kashmir Bulletin — KB)