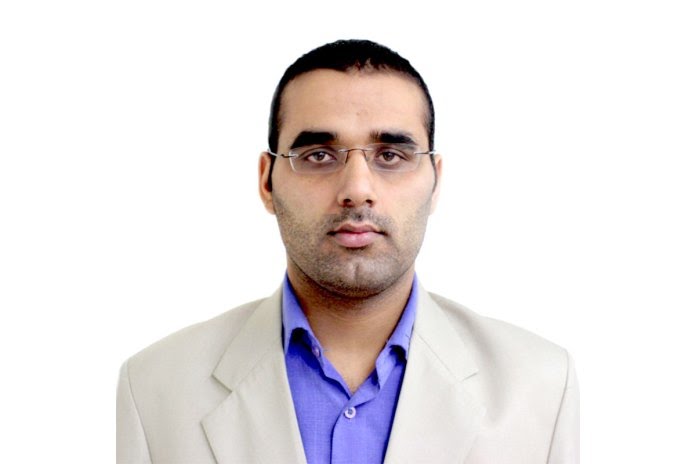 Dr Safder Ganaie, Kashmir Virologist
Umaisar Gull Ganie
Srinagar, Apr 19 (KNO): In a significant scientific breakthrough, researchers at Washington University in the United States have discovered how the deadly Rift Valley fever virus infects human cells.
The discovery has been done by a virologist from Zaloora, Sopore of north Kashmir Baramulla, Dr Safder Ganaie, one of the leading scientists involved in the discovery.
The discovery by Dr Ganaie and his colleagues was recently published in the prestigious journal Cell. He and his team found that the Rift Valley fever virus, speared by mosquitoes, enters human cells via a  protein normally involved in mopping up low-density lipoproteins – the carriers of so-called ‘bad cholesterol’ — from the blood.
The discovery is expected to lead to therapies that prevent Rift Valley fever or reduce its severity. The World Health Organization lists Rift Valley fever as a prioritized disease likely to cause epidemics in the near future.
In an exclusive chat with news agency—Kashmir News Observer (KNO), Dr Ganaie said that the virus is spread by mosquitoes among domesticated animals, which then pass it on to people.
The study was conducted in collaboration with the University of Pittsburgh, University of Toronto, Harvard University, and Broad Institute of MIT and Harvard and he was the lead author of the study, he said
To find out how the virus invades cells, Dr Ganaie and his team disrupted 20,000 normal genes by using CRISPR technology and found that the virus failed to infect cells that lacked the gene for LDL receptor-related protein 1, or LRP1. Further experiments showed that the virus needs LRP1 to infect hamster, bovine, monkey, and human cells, indicating that it uses the same protein across distantly related species.
“This discovery will help us to understand how the Rift Valley fever virus spreads not only throughout the human body but also how it is able to infect mosquitoes and different species of mammals,” he said.
Dr. Safder Ganaie is Kashmir based virologist in the USA. His research is focused on emerging and re-emerging viruses that cause fatal diseases in humans including Ebola, Hantavirus, Crimean Congo hemorrhagic fever virus, La Crosse, Rift Valley Fever and Oropouche virus.
He said we were working on the discovery for the last three years. Asked whether there is any chance of the virus spreading fast in the globe, he said WHO and US NIH declare these viruses category A pathogens with a potential to cause pandemic in future. After the virus attains certain mutations, they become highly infectious. But when it would happen, we don’t know. Therefore investigating these viruses and how they infect cells will help us to develop treatment in advance.
These viruses are investigated in only highly equipped bio-containment laboratories of biosafety level -3 and -4. In the past decade, Dr Ganaie has made several discoveries regarding how these viruses infect human, and animals. Most of these viruses don’t have any virus specific treatment available.
His studies have been published in the highly reputed international journals of virology including Cell, PLos Pathogens, Journal of Virology, mBio.
He completed his primary education from his native village and got his Bachelor’s degree in Science from Degree College Sopore. Dr Ganaie joined Kashmir University for his Master’s degree in Biotechnology. After completing his master’s, he did qualify fellowship exams like CSIR, UGC, ICMR-Junior Research Fellowship, and GATE exams to pursue research in the bioscience field.
In 2012 he decided to pursue his PhD in the United States and joined the University of Kansas. He earned his PhD degree with honours from The University of Kansas. For his outstanding research accomplishments, he received the 2018-Micro Remi Amelunxen Award from the University of Kansas. He has received awards and presented at different international conferences in the USA and China—(KNO)