Will not buy peace in Jammu and Kashmir, but will establish it: LG Manoj Sinha 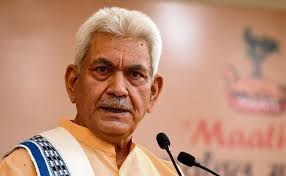 Jammu, Apr 19: Lieutenant Governor Manoj Sinha on Tuesday said the government is committed to establishing peace in Jammu and Kashmir instead of the “past practice of buying it”.
He said the security forces have gained the upper hand in countering terrorism in Jammu and Kashmir and are working to destroy the militant ecosystem in the Union Territory.
“We will not buy peace. We will establish peace (in Jammu and Kashmir)”, Sinha told reporters at the Raj Bhawan.
Sinha, who was replying to a question about an environment of fear being created in Kashmir by selective killings by militants, said the “intention of our administration is very clear that not to buy peace but establish it”.
“The era has gone when peace was being bought in Jammu and Kashmir. We will establish it.
We want to destroy ecosystem of terrorism from its roots”, he added.
The LG further maintained that it may take time but the government will destroy the militant ecosystem.
“The security forces have the upper hand (over militants). This is an accepted fact. Our security forces have been able to break their (militants) backbone”, he said.
Sinha said that militants are attacking soft targets out of frustration, but it is being taken care of.
He cautioned that such incidents can occure in future as well. (Agencies)