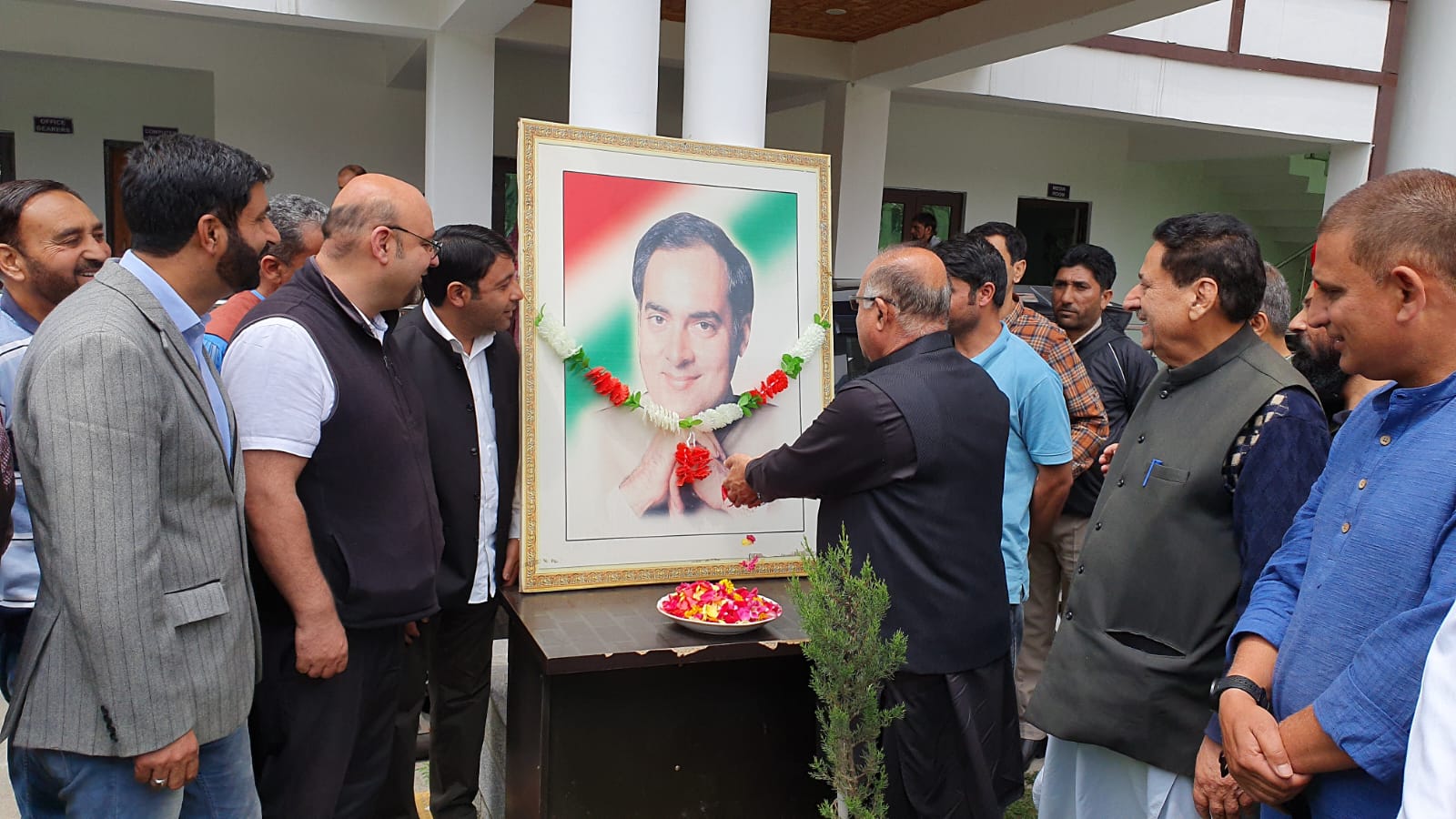 Srinagar May 21,2022. The Jammu and Kashmir Pradesh Congress Committee (JKPCC) Saturday paid floral tributes to Former Prime Minister Late. Rajiv Gandhi on his 31st death anniversary at Srinagar Party Office.
On the death anniversary of Rajiv Gandhi, JKPCC held a meeting of Senior Party Leaders, PCC Office bearers, DCC Presidents and prominent workers in which the leaders paid floral tributes to Former Prime Minister while recalling his sacrifices and selfless services to the Nation.
Senior Congress Leader & CWC member Tariq Hameed Karra presided over the meeting and highlighted the great achievements and selfless services rendered by the departed leader to the Nation, terming him as a revolutionary and visionary leader.
Rajiv Ji was credited of bringing development at the door steps of the people through three tyre panchayat raj system, which is playing a pivotal role in the inclusive development of India at gras root levels especially in rural India.
Tariq Hameed Karra said Rajiv Gandhi brought the IT revolution in the country bringing it (India) at par with fast developing countries in the world in respect of computer science and technology responsible for playing significant role in the inclusive development of the Nation.
On this occasion Karra said people across India are witnessing dismaying situation in every field of life and slammed the anti-people policies of BJP against the masses in general while making its rich cronies more richer and poor people more poorer.
He said the success story of BJP in 2014 was its disinformation campaign, similarly 2019 was success story of BJP campaign against minorities while as the current disturbing situation is  a prelude to the upcoming elections in 2024 for gaining electoral mileage while compromising on the National interests, which is dangerous for the entire Nation in totality.
There was a time when India was known as incredible which is today called as intolerant India. BJP is aggressively indulging in religious, social and linguistic ingression aiming to remain in power, but the people have understood the nefarious designs of this particular party of its divisive and malicious intentions.
Karra further said that Rajiv Gandhi’s focal point of governance was based on reconciliation process. It is because of this belief he could solve many contentious and sensitive regional and sub regional conflict. He is credited with solving Punjab Problem by   Rajiv Longiwala accord, Assam, Mizoram, Arunachal unrest. On the contrary today’s dispensation is more focused on negative assertion and jackboot policy may it be Jammu and Kashmir, Indian minorities of all hues, farmers, demonetization, lynching, religious discord between the communities.
Historically speaking BJP has become the true inheritors of Britishers, who ruled India only on one assertion (divide and rule).
Rajiv Gandhi’s foreign policies brought him laurels across the world and his assertion in non-proliferation of nuclear heads in united Nations laid the foundation for India’s prospective stand about the subject, CWC Member added.
Senior Party Leader (Ex. Legislator) Bashir Ahmad Magrey, JKPCC General Secretaries Surinder Singh Channi, Shamema Iqbal, DCC Presidents Abdul Gani Khan, Sahil Farooq, Fayaz Ahmad Mir, Mushtaq Ahmad Khanday, Umer Jaan, Mir Ruvais (WP Sgr) AICC Member Nissar Ahmad Mundoo besides Irfan Naqib, PYC Vice President Amir Rasool, Ruhulla Gazi,Mir Mustafa Magami,Showket Malik,Mahila Vice President Shameema Sopori and various other leader paid floral tributes to Former Prime Minister.