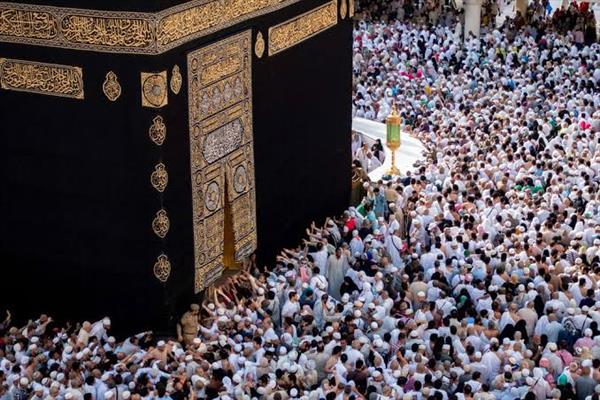 Div Com reviews arrangements for Hajj Pilgrimage, 2022
Calls for close synergy among departments for hassle-free arrangements
Srinagar, May 20: Divisional Commissioner (Div Com) Kashmir, Pandurang K Pole Friday chaired a meeting of officers to review the arrangements for smooth departure of Hajj pilgrims for Holy Journey this year.
The meeting was attended by DIG Police, SSP Traffic, SSP Security, Representatives of Div Com Ladakh & Jammu; Commissioner, SMC; Executive Officer, Hajj Committee;  MD SRTC; Dir Health Services Kashmir;  Director Airport Authority and officers of district administration, customs department,  immigration department besides branch manager of Bombay Mercantile Bank, Srinagar.
The meeting was informed that 6700 pilgrims will proceed to the annual Hajj from Srinagar International Airport from May 30 for which two flights shall operate on each day.
On the occasion Div Com asked officers to notify timing for pilgrims to report five hours before the flight departure time at Hajj House Srinagar to complete the necessities of customs and immigration on time so they do not have to face any inconvenience. He emphasized for wide circulation and publicity of the timing of the entire schedule.
He directed concerned officers to make boarding and lodging arrangements for the Ladakh and Jammu based pilgrims at Haj House Srinagar who shall report there to proceed on journey.
Meanwhile, the Div Com directed for vaccination of Pilgrims at district headquarters while Srinagar based hajj candidates shall be vaccinated at  Hajj House Bemina. Besides, he informed that pilgrims must get a negative  RTPCR report  within 72 hours before flight  departure.
He also directed concerned officers to ensure an uninterrupted facility of power and water at Hajj House Bemina.
Further, he directed for proper security arrangements at Hajj House besides issuing security cards to officials to be deployed for facilitating pilgrims. Div Com also directed for deployment of homeguards, Red Cross Volunteers to facilitate hujjaj.
MD, SRTC was asked to provide buses for transportation of pilgrims and luggage during the entire activity.
Moreover, he directed for stationing of Fire Tenders at Haj House and Airport besides replacing existing fire extinguishers with new ones and asked BSNL to ensure internet connectivity.
Further, he called for close synergy among departments to ensure hassle-free arrangements and directed for constitution of teams consisting of members from related departments for clear communication and coordination.
SendShareTweetShareSendScan