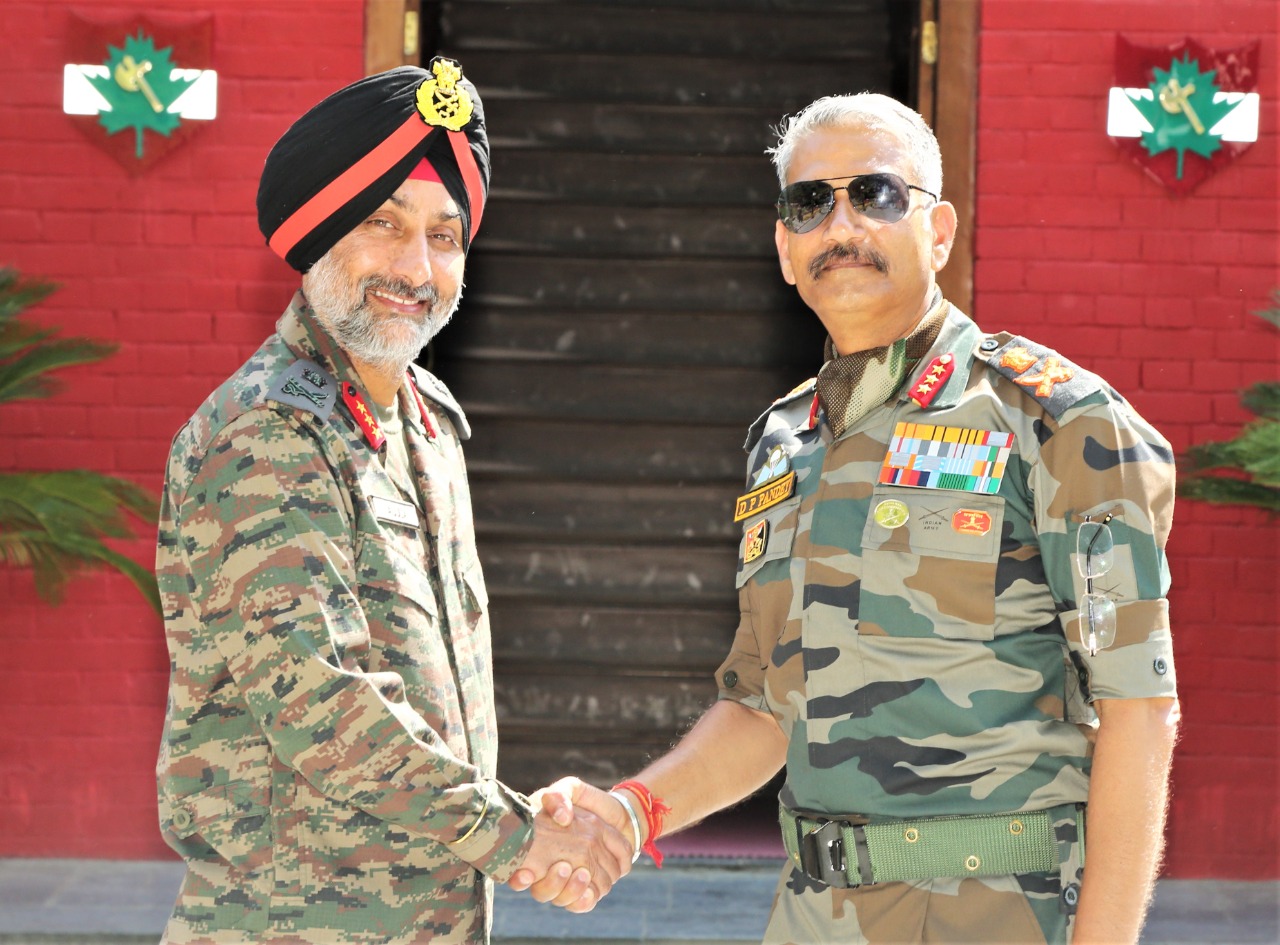 Srinagar, 09 May (KB): Lt Gen Devendra Pratap Pandey today handed over the command of the strategic Kashmir based (15 Corps) to Lt Gen Amardeep Singh Aujla at HQ 15 Corps today.
According to an statement issued by the Defence spokesperson, a copy of which is in possession of Kashmir Bulletin (KB), said that Lt Gen Devendra Pratap Pandey commanded the Corps in a critical phase of 2021, where in Kashmir was confronted with the twin challenges of terrorism and second wave of COVID-19 pandemic. 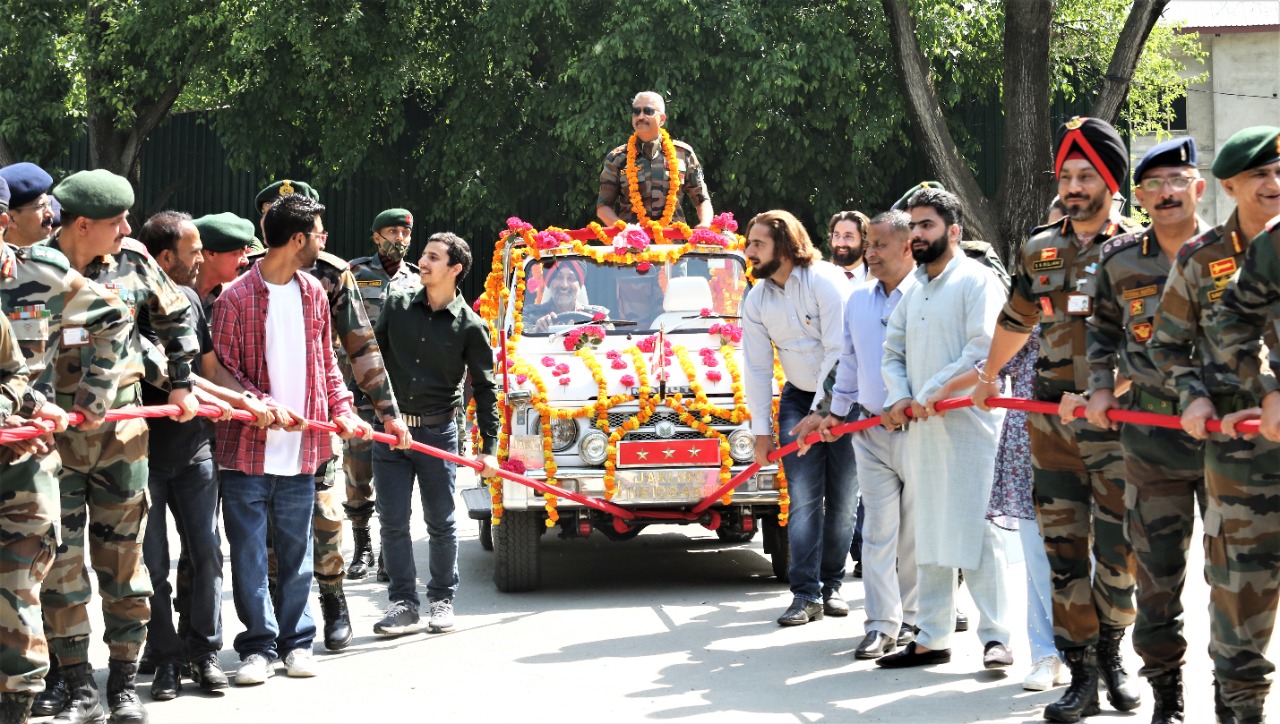 “The tenure has been defined by an improved security environment prevailing at the Line of Control, as well as in hinterland. With the Civil Administration and Security Forces synergizing their efforts to bring normalcy back to Kashmir, militancy is on decline with assessed residual militants numbers reduced to an all-time low,” he said.
Moreover, “A dynamic deployment along the Line of Control integrated by technical intelligence and robust anti-infiltration grid ensured drastically reduced infiltration. The opportunity afforded by the Ceasefire Violation agreement resulted in renewed attempts to bring succour to the local population residing along the Line of Control.”
In the hinterland, “all elements of Security Forces were synergized to break the cycle of violence. Relentless operations, in tandem with Jammu & Kashmir Police and other CAPFs, based on hard intelligence were carried out to neutralise militants, with minimum collateral damage and zero civilian fatalities. The approach also included outreach to families, including those of active terrorists to minimise recruitment and induce surrenders amongst local militants,” he said.
“Various programmes were incorporated to stymie the radicalisation and incitement being carried out by White Collar militants to misguide and force the youth of Kashmir onto the path of violence. The conflict entrepreneurs were targeted, while simultaneously engaging youth through various initiatives, extending myriad platforms to showcase their talent, ranging from sports to cultural arenas. The efforts have borne fruits, with the terrorists’ number dwindling to an all-time low of 150.”
As per the spokesperson, “Lt Gen Pandey ensured an improved Soldier-Citizen connect. His impromptu visits to Sopore, Shopian, Dardpora, Trehgam and remote areas of Kashmir enhanced his rapport with the populace. This effort also included many successful events all over the Kashmir Valley, co-opting the citizens in various sports, culture, arts, education, skilling and health initiatives.”
“The General Officer strongly propounded for a second chance to the misguided youth to bring them back from the brink, as he believes this to be critical in achieving lasting peace in J&K. The ‘Sahi Raasta’ program impacted the cognitive mindspace of the youth, aligning them to the mainstream.”
“His easy rapport with the youth, ignited minds to think beyond ‘Problems in Kashmir’, and gave voice to popular sentiment – through Seminars, Josh Talks and Debates.”
“In creating awareness about the role of Women in Kashmiri society, he emphasized on Kota Rani, Lal Ded and Habba Khatoon during Women Equality Day celebrations. The General exhorted the citizens of Kashmir to think of their glorious history much beyond the last few centuries.”
“Lt Gen Devendra Pratap Pandey’s contribution to peace and stability in Kashmir were recognised by the award of the prestigious ‘Uttam Yudh Seva Medal’ (UYSM) by the Hon’ble President of India, Shri Ram Nath Kovind on 26 Jan 2022.”
Moreover, “In his farewell message, Lt Gen Pandey complimented all ranks of Chinar Corps for their dedication and hard work. He appreciated JKP, CAPFs, Civil administration and the community members for their relentless support in the joint effort towards peace and prosperity in J&K. He conveyed his greetings and best wishes to the citizens of Kashmir and the entire Chinar Corps fraternity,” he said—(Kashmir Bulletin–KB)