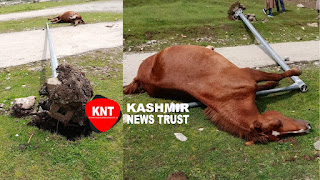 Umar Raina Sonmarg, May 21, KNT: A horse died, of electrocution at tourist resort Sonmarg due to alleged negligence of Sonmarg Development Authority. One of the electric poles installed by Sonmarg Development Authority (SDA) had been uprooted last week at Thajvas Road. Even after a week, SDA didn’t bother to re-install or relocate the electric pole to another place. Mushtaq Ahmed Raina-the owner of the horse who lives in Gohipara village of Central Kashmir’s Ganderbal district told news agency Kashmir News Trust that he lost his horse due to the negligence of the SDA. “My horse was walking and got electrocuted once came into the contact of the electric pole that was lying on the ground,” Raina said and sought action against the erring officials. Locals lambasted SDA for not attending the fallen electric police. “In place of a horse, it could have been a tourist. Action should be taken against the negligent employees,” they demanded. (KNT)