Share on WhatsAppShare on Facebook
Says service related issues of KP employees to be resolved soon, place of duties to be ensured close to towns, district headquarters;  2100 backlog surgeries conducted in week-long medical camp organized in unison with Rotary Int’l; F&ES deptt to conduct safety audit of all main offices of Govt deptt 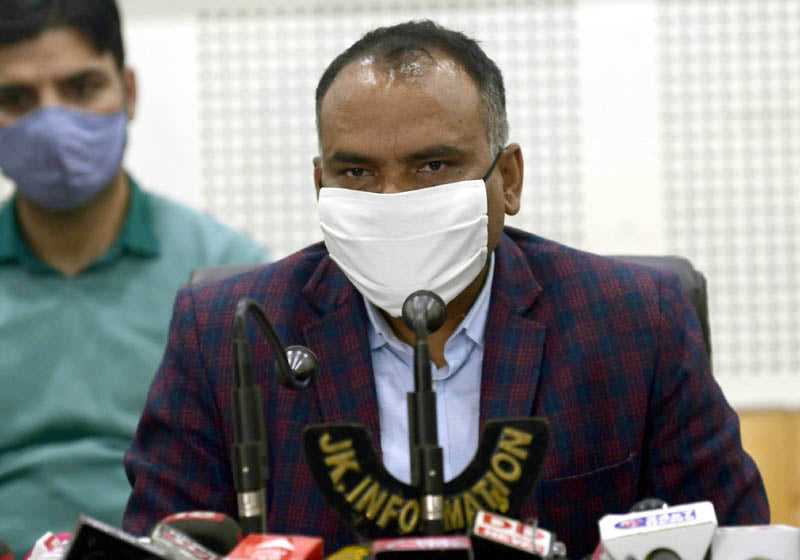 Srinagar, May 18 (KNO): Divisional Commissioner, Kashmir, P K Pole on Wednesday that the inquiry into the killing of two civilians in Pulwama was on and if the slain duo is found innocent, the government will provide jobs to the next of kin of both the civilians under SRO 43.
According to the news agency—Kashmir News Observer (KNO), he also said that the service related issues of the agitating Kashmiri Pandit employees will be resolved soon and that nearly 2100 backlog surgeries have been conducted in the past one week during the medical camp organized by the Rotary International in northern and central Kashmir districts.
Addressing a news conference, Pole, who was accompanied by Director Health Services, Kashmir, Dr. Mushtaq Ahmad and Dr Rajiv Pradhan¸ Chief, Rotary Club here said that the magisterial enquiry into the civilian killings in Pulwama is already underway. “The civilian involvement is being probed and if their involvement is not found, all the relief measures and SRO43 benefits will be provided to their families,” Pole said.
About the Kashmiri Pandit employees, he said that he chaired a meeting today with HoDs, Chief Engineers and Directors and they were asked that the positing of these employees should be given close to the towns and district headquarters so that the vulnerable areas will be avoided and the sense of security is ensured to the Kashmiri Pandits.
“All the service related issues including duties in far-off places, transfers of couples at the same place and other related issues falling under my jurisdiction will be completed soon and implemented on the ground,” Pole said.
Asked about the fire incident at the Traffic headquarters building in the midnight, Pole said that these incidents occur especially due to the wooden roof. “Fire and Emergency Service department will visit all the major offices of government departments and conduct a fire audit there. The fire extinguishers will be made available to prevent such incidents in the future,” he said.
Sharing details of a medical health camp organized by Rotary International, Pole said that the backlog surgeries that were postponed due to the three Covid waves were conducted. “Nearly 2100 surgeries have been conducted at almost 14-15 operation theatres, working from the last one week, which start functioning from morning 7 am to evening 8 pm,” he said.
The surgeries were conducted in northern and central districts of Kashmir, he said, adding that on the request of Lieutenant Governor, Manoj Sinha, the camp will be organized in South Kashmir as well.
Dr Rajeev Pradhan, International Rotary Governor, said that the club has been working in different countries to ensure better health to the people. After northern and central Kashmir, the camp will be organized in South Kashmir on the request by Lieutenant Governor in coming days,” he said.
Director Health Services, Kashmir, Dr. Mushtaq Ahmad said that there were nearly 8000 backlog surgeries due to the third wave of Covid-19 and in the last one week, over 2100 major surgeries were conducted.
“We have already received directions from the Divisional Commissioner to clear the backlog surgeries. We will do that at earliest,” he said, as per KNO correspondent.
About the heart transplantation surgeries, he said that a survey will be conduct to identify the patients, whose registration will be done following which the procedure will be carried out—(KNO)
Click Here To Join Another Group
One More Link; Click Me