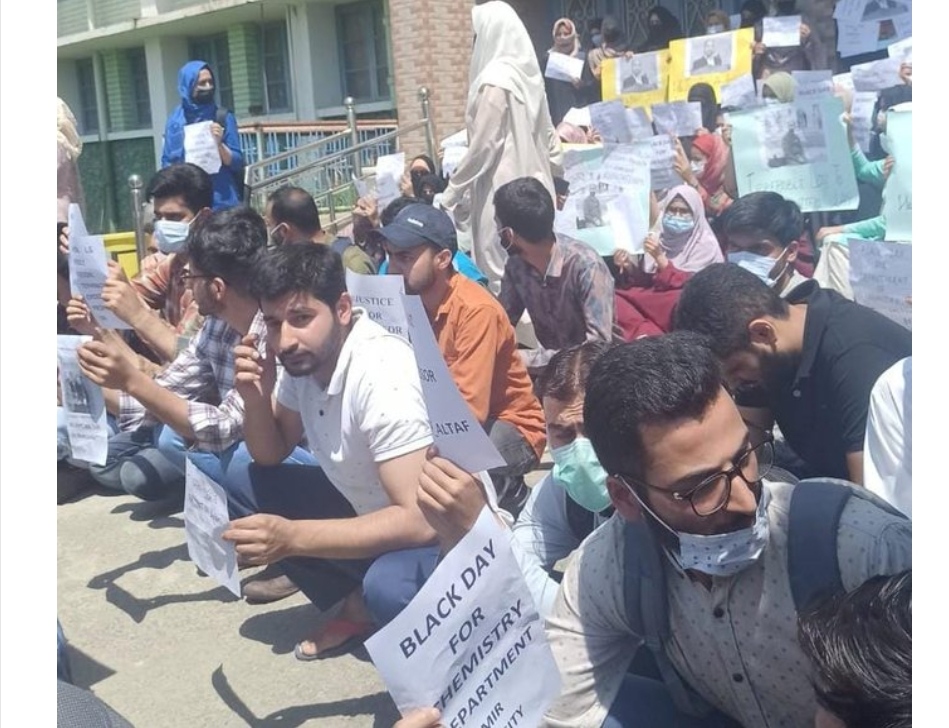 Students of the Kashmir University on Saturday staged a massive protest against the termination of a Chemistry Professor by the Jammu Kashmir administration over alleged militancy links.
The Jammu Kashmir administration on Friday terminated the services of three employees including a Professor in the Chemistry Department, University of Kashmir, under Article 311(2) (c) of the Constitution of India. Two other employees dismissed without holding inquiry include a policeman from Doda and a teacher from the Kupwara district.
An order in this regard issued by the LG Manoj Sinha read, “The Lieutenant Governor is satisfied under sub-clause (c) of the proviso to clause (2) of Article 311 of the Constitution of India that in the interest of the security of the State, it is not expedient to hold an inquiry in the case of Altaf Hussain Pandit, Professor in Chemistry Department, University of Kashmir.”
The termination of Altaf Hussain Pandit, a chemistry professor at Kashmir University has created anguish among the students who staged a sit-in on Saturday morning raising slogans in support of the terminated professor.
Speaking to The Kashmiriyat, a student said that the administration should roll back the order and reinstate Altaf Hussain Pandit.
Last year, the Jammu Kashmir administration set up a Special Task Force (STF) to initiate action against government employees suspected of activities “against the security of the State”. Though the move was widely criticized by politicians, union leaders and civil society members, dozens of Government employees have been terminated so far. (KASHMIRIYAT)