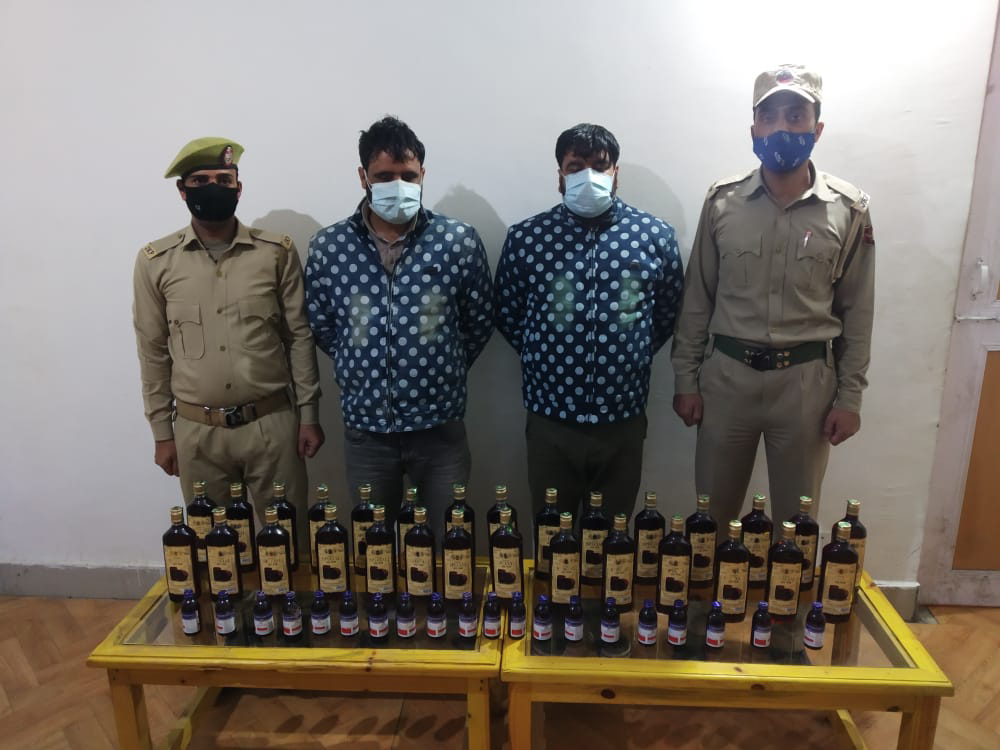 Kulgam May 24, 2022 (KB): Continuing its efforts to tackle the menace of drugs and taking stringent action against the drug Peddlers, Kulgam Police arrested two drug peddlers and recovered contraband substances from their possession.
During naka checking at Srandoo crossing, Police Party from PS Kulgam led by SHO Kulgam under the supervision of DySP HQR Kulgam intercepted one Scooty bearing registration number *JK03H-6702* with 03 persons traveling on it. During search *29 Rum (750ml each)* and *20 bottles of chloropheniramite maleate and Codeine Phosphate (100ml each)* was recovered from their  possession.The arrested drug peddlers have been identified as: Bilal Ahmad Dar S/O Nazir Ahmad Dar R/O Bogund &Gulzar Ahmad Dar S/O Ghulam Qadir Dar R/O NaiBasti Anantnag have been shifted to PS  Kulgam where they remain in custody. However  one drug peddler namely Farooq Ahmad Dar S/O Abdul Rashid Dar a resident of Bogund managed to flee from the spot.
Accordingly, a case FIR number 63/2022 under section 8/21, 29 NDPS Act,  48 excise Act has been registered at Police Station Kulgam and investigation has been initiated also efforts are on to nab the absconded drug peddler.
Community members are requested to come forward with any information regarding whereabouts of absconded person and share the information with DySP HQR Kulgam or with PCR Kulgam
SendShareTweetShareSendScan