Share on WhatsAppShare on Facebook
Says have rescued snakes since March this year; My effort always remains no to harm animals while rescuing; Early summer pushing snakes out of hides; Urges locals not to take risk, give respect to animals; always call experts for rescue 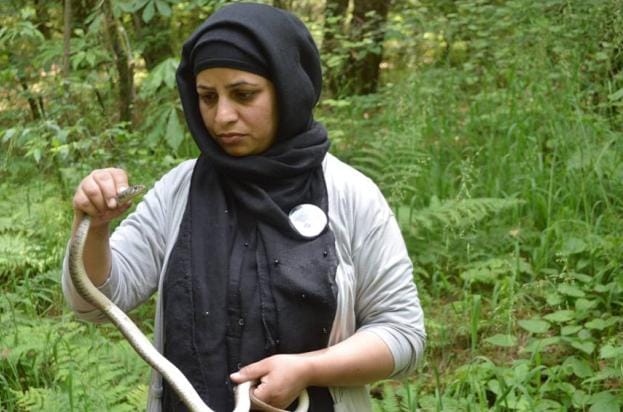 Umaisar Gull Ganie
Srinagar, May 18 (KNO): Aliya Mir, 41, the lone wildlife expert from Srinagar, is earning fame and taking social media by a storm for her unique art of rescuing the dangerous wild animals like snakes, reptiles, bears, leopards in a most passionate and play-way manner.
Mir believes that every wild animal deserves respect and no one should harm them. Her video while rescuing a 6-feet reptile stuck in a scooty outside civil secretariat evoked tremendous response on the social media with netizens praising her work. As per Mir, she has been in the field of wildlife since past 15 years and has an expertise of dealing with all kinds of wild animals. 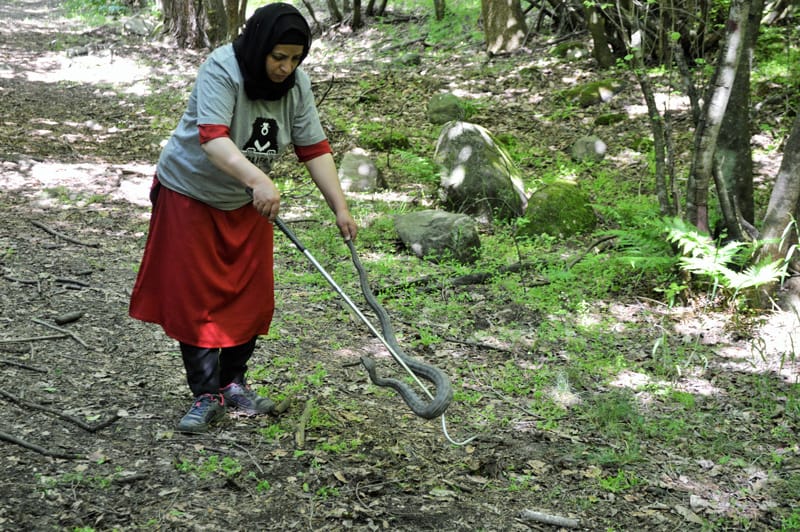 Since March this year, Mir has rescued 50 snakes/reptiles from various parts of Kashmir including Srinagar. She says as Kashmir too is witnessing early summer, snakes, reptiles and other wild animals are coming out of their hides early. At present Mir is Project Manager at Wildlife SoS that works in collaboration with the Kashmir Wildlife department.
“This indeed is a tough job which needs courage and art. My endeavour always has been to rescue animals including snakes etc without harming them. The recent case outside Civil Secretariat was a tough job as the reptile had coiled itself and if I would have pulled it, that would have caused harm to it,” Mir told news agency—Kashmir News Observer (KNO), in an exclusive interview. “Applying all my mind and art I have learned over the years, I finally succeeded in pulling the reptile without causing any harm to it.”
The 41-year-old Mathematician-turned wild life expert, said her effort always remains to reach the spot as early as possible to ensure locals don’t cause harm to the animal.  Mir started working as a volunteer with Wildlife SOS in 2007 and later joined as a project manager. She underwent some on-campus training besides certificate courses on handling man-animal conflict.
She says that her job does not merely involve catching or rescuing animals or reptiles, but also rehabilitating them. “I don’t remember the exact number, but over the years I have rescued snakes, bears, turtles, birds, bears and leopards from various residential areas in the Srinagar district,” she says.
Mir’s most famous operations include rescuing poisonous snakes from the residences of former Jammu Kashmir chief ministers Mehbooba Mufti and Omar Abdullah.
Wildlife SOS is a conservation non-profit organisation that has been rescuing and rehabilitating wild animals since 1995, helping in biodiversity conservation. Mir is being praised on the internet for her bravery. “Not easy to deal with snakes… salute to you,” wrote a netizen.  Another one wrote, “This needs courage… you have that… God bless.” Mir urges locals not to harm or attack wild animals and instead call her for the timely rescue. “Every wild animal deserves respect and love. We have no right to harm them,” she said—(KNO)
SendShareTweetShareSendScan