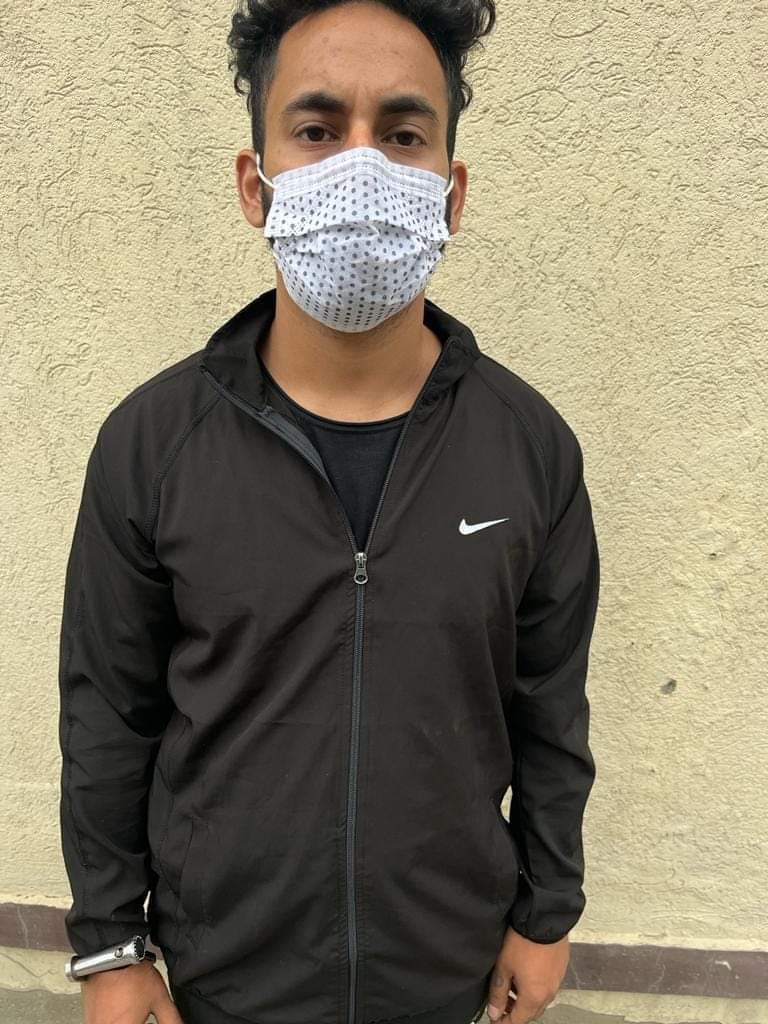 Srinagar, May 31: Cyber Police Kashmir has arrested Srinagar-based notorious con-man involved in dozens of online cheating and fraud cases. A team of Cyber Police Kashmir apprehended Haroon Fayaz Bazaz son of Fayaz Ahmad Bazaaz resident of Alamgari Bazaar, Srinagar from New Delhi. The accused has duped dozens of people on the pretext of selling online clothes and cheap airline tickets, and he was mainly operating from Delhi and Goa.
Cyber Police Kashmir received a complaint from one Ishfaq Ahmad son of Gh. Mohd Bhat resident of Bandipora, to the effect that on 25-09-2021, while using social media site Facebook, he saw a post uploaded by one Facebook user having a Facebook page ‘Craft Core Exports’ dealing with winter clothes collection. Accordingly, he  contacted the said Facebook user on his given mobile number, who introduced himself as wholesale dealer of clothes, presently running a shop in the name of Haroon Bazaz & Co,  located at 8/21 Jangpur Extension, South Delhi. The complainant ordered some clothes and electronic items online from him, for which he transferred a staggering amount of Rs 3,61,000 into the accused’s bank account. After that, the said Facebook user switched off his phone. Later on, the complainant came to know that the said Facebook user is a notorious cheater /fraudster who is impersonating himself as businessman via social media platforms for the purpose of defrauding innocent people of their hard earned money.
On the receipt of this information, case FIR no 25/2021 under relevant sections of law was registered and investigation taken up.
During investigation, this Police Station came to know from different sources and various media channels that this online fraudster has not only duped the complainant, but also dozens of other innocent people in Kashmir valley on the pretext of cheap airline ticket fraud. The Modus Operandi of the accused was to create fake Social Media profiles to impersonate authentic travel agencies and then post advertisements for cheap air tickets with best offers. People, in an urgency to travel by Air, search low price travel tickets on social media sites and upon click-baiting to the accused’s site, they would get trapped in this fraud. Gullible customers shared personal details and make online payments to the fraudster’s bank account. After paying money online, the said fraudster would not provide tickets to customers and when customers called him, his mobile number would be switched off siphoning off the money of gullible citizens.
Almost a dozen complaints of such nature were received from different persons and accordingly, another case FIR no. 27/2022 under relevant sections was registered by Police Station Cyber. Strenuous efforts were made to arrest the accused, however, the accused deftly evaded arrest by frequently changing his locations. Utilizing technical expertise and investigative acumen of the Cyber Police team, the accused was found to be in New Delhi. Keeping in view the sensitivity and nature of offences committed by the accused , on the directions of Inspector General of Police, Kashmir Zone , Srinagar a special team Of Cyber Police Kashmir was deputed to New Delhi and with assistance of Delhi Police, the accused was arrested from Paharganj area of New Delhi.
General public is once again advised not to fall prey to  cyber fraudsters over social media claiming to provide cheaper rates on material or services etc.
Click Here To Join Another Group
One More Link; Click Me