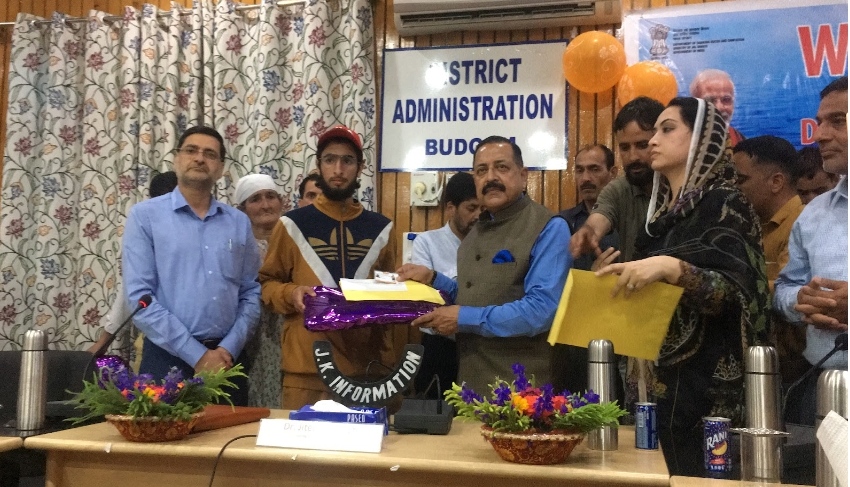 Budgam, May 30 (KB): Union Minister of State (IC) Ministry of Science and Technology; Minister of State (IC) Ministry of Earth Science; MoS in Prime Minister’s Office and Ministry of Personnel, Public Grievances & Pensions, Dr. Jitendra Singh today   inaugurated recently  completed upgraded Boys High School building having smart class facility with digitilised system at Ompora Badgam.
The 10- room double story school building for smart class rooms also comprises of facilities including library and common hall.
During interaction with staff and students, the Minister assured that the school building shall be highly equipped with latest facilities including smart classrooms and solar facility on priority.
During his visit to Budgam district   the Minister also interacted with  covid affected children at Conference Hall Budgam. Commemorating 8 years of the Modi Govt, he distributed cheques of Rs. 10 thousand,  school bags, Ayushman Bharat (Golden cards), scholarships under Saksham scheme among the beneficiaries who have been adversely hit during the pandemic.
Speaking on the occasion, the Minister said that on the completion of 8 years of Prime Minister Narendra Modi led government, the Centre has launched PM Care for children, an initiative to reach out to children.
He said that the aim of the initiative is to send a message across the country that the affected children who have lost their parents should not feel orphans.
“They are our own children, and we as a society have collective responsibility to take care of them,” Minister said.
He further said that the Union government is committed to good governance, and assured all possible support to these children and all other destitute through various schemes and initiatives launched by the central government.
The Minister also witnessed under- 19 inter- Zonal district level finals of different sports events at Sports Stadium Budgam, where he also distributed sports kits and trophies among the participants .
After declaring the games open, the Minister called for proper identification of talent of sports loving youth and their proper training for their better performance in the field.
He urged youth to take part in sports which is now recognized as one of the career options as well.
Later, the Minister inspected various stalls set up by different departments and distributed skill upliftment certificates among deserving beneficiaries. He distributed authority letters and farming equipments among various farmers on the occasion.
During his tour, the Minister also distributed scooties,  prosthetic aid to the needy and marriage assistance certificates with Rs 50,000 cheque each to daughters living Below Poverty Line. He said that the Modi government, on completion of eight years of its service to the nation, is reaching out to the people with the spirit of “Seva” that has been the hallmark of PM Modi’s regime.
Later, various delegations including DDC and BDC members, Councillors, PRIs, civil society members,  traders, youth delegations , political workers and others  different delegations called upon the minister at  Conference Hall Budgam.
They raised their issues and demands with the minister for prompt redressal.
The minister gave patient hearing to the delegations and assured that all their genuine demands shall be looked into on priority. (Kashmir Bulletin–KB)
Click Here To Join Another Group
One More Link; Click Me