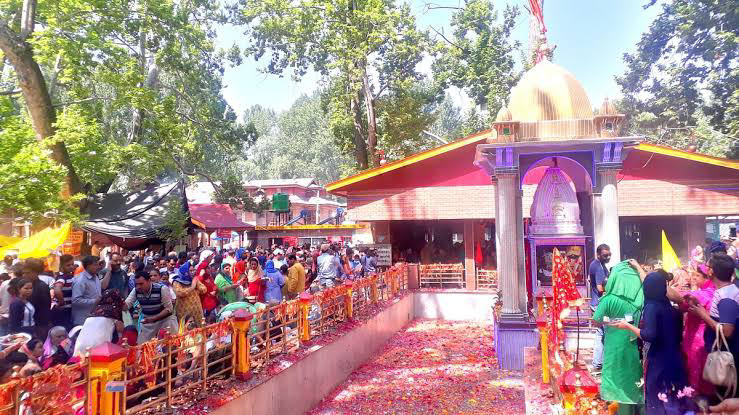 KPs, Tourists flock temple; BJP leader Ashok Koul says number of devotees will increase by afternoon
Raja Syed Rather
Ganderbal, Jun 08 (KNO): The annual Mata Kheer Bhawani Mela started on Wednesday at Tullamulla village of Jammu and Kashmir’s Ganderbal district with Kashmiri Pandits and tourists flocking the temple to pay obeisance.
As per news agency—Kashmir News Observer (KNO), Tullamulla shrine in addition to being the holiest shrine of the local Kashmiri Pandit community is also the symbol of centuries-old eclectic culture and brotherhood among different communities of Kashmir.
The spring inside the shrine has historic significance as locals believe that the colour of its water on the festival day forebears the events that follow till the next year.  Local Dharmarth Trust maintains the shrine complex spread over a large piece of land surrounded by springs.
The Tulmulla area of district Ganderbal witnessed enthusiastic scenes as large number of devotees arrived at the temple of Mata Ragnya Devi. A KP devotee said that it is after almost two years that devotees are arriving at the temple to pay obeisance and to pray for themselves and the entire humanity. “We urge KPs to come to this temple and enjoy the spiritual feeling here,” he said.
Tourists were also seen paying obeisance at the temple. A group of tourists from Maharashtra told KNO that they have seen Kheer Bhawani shrine for the first time and are feeling so happy. “There is a solace and we feel enchanted over seeing Muslims and Pandits celebrating the Mela together,” said Meenakshi, a tourist.
BJP’s General Secretary Organisation (J&K) Ashok Koul who visited the shine told reporters that there was nothing like less rush. “Devotees are coming and by afternoon the temple premises will be jam-packed,” he said.
Mostly Kashmiri Pandits were seen performing the rituals of the festival at the temple besides that Muslims were seen greeting pandits and making arrangements.
A sign of communal harmony is always revisited at this temple during the historical festival which provides an opportunity to local Muslims who wait eagerly to re-unite with the Pandit community who migrated from Kashmir in the early 1990s—(KNO)
SendShareTweetShareSendScan