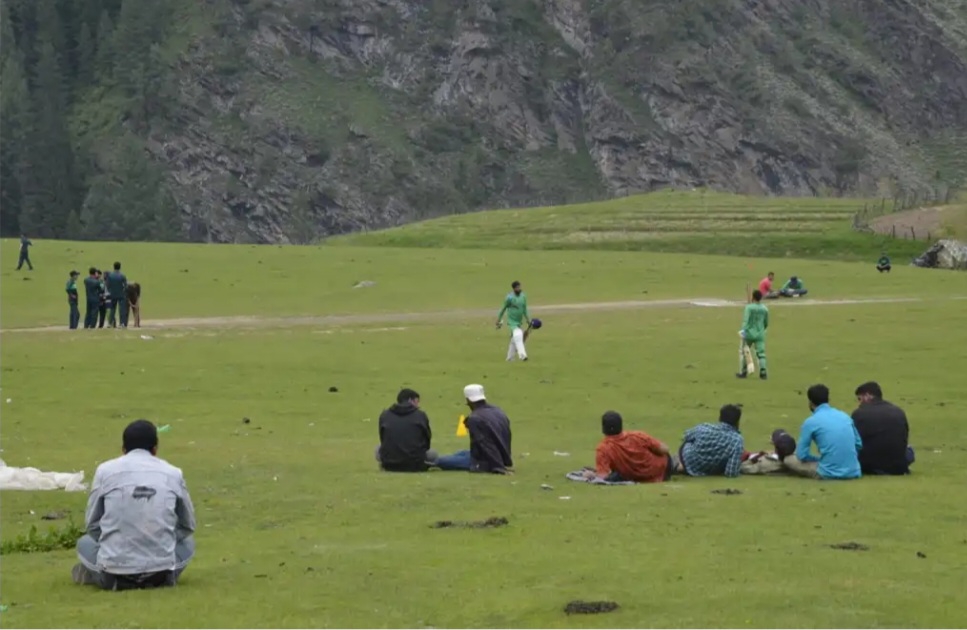 GUREZ: A grassy playfield sits in between the high mountains of Bagtore, a small village less than a kilometre away from the Line of Control (LoC), the de facto border that divides India and Pakistan.

A few years ago, sportsmen of the village were thirsty to play on the field. However, ever since a ceasefire in hostility between the two nations was announced, the playfield is now making a lot of noise over cricket, replacing the rattle of the shelling that caused death and despair to its residents for decades.

The playfield is surrounded by small bankers of the Indian Army on two sides and was always a target of Pakistani Rangers before 2021, but now the players and spectators are making huge noise in it while watching interesting cricket matches.

The locals of Bagtore are visibly happy after the guns fell silent on February 25, 2021, when in a surprise development, the armies of both countries announced the ceasefire and recommitted themselves to the2003 Vajpayee-era ceasefire agreement.

Mujtaba Hussain (26), a local who has been interested in cricket since childhood says that he was always angry with himself as to why he was living in this war-torn hamlet, seeing the state of the deserted field where he wanted to play but could not.

“Do whatever you have to do at home but don’t go to the field because shelling can happen at any time, which can kill you,” Mujtaba used to hear this advice continuously from his family two years ago. But he always hoped that one day things would get better and “our destiny would change.”

Mujtaba says that this playing field was most affected whenever there was shelling between the two armies.

“Even artillery shells fired from Pakistani army used to fall in it and was causing it to shake,” he said.

“Angered by mourning and destruction, We were always worried about when our dreams and aspirations would become a reality, ” he said, adding that the long-awaited good time finally came in 2021 when the ceasefire agreement was implemented by both countries.

According to officials, the year 2020 witnessed 4,645 violations in J&K, which equates to nearly 12.7 violations a day.

“My grandfather had heard on the radio that day that there would be peace on the borders now,” says Mujtaba. Then he rejoiced and said, “If we had not seen the destruction of our region, you people would have seen its destiny change.”

“Things have changed in the last two years. A quite social change is being witnessed in this area while people are busy with their own affairs,” he said, adding that the playfield is now full of spectators during cricket matches.

Reyaz Lone another local says that many cricket tournaments have been held here in the last two years and the panic that was caused by the shelling is no longer visible.

“This region is reverberating with sounds of peace and happiness. Boys are having fun,” he added. Reyaz is happy at the transition that his village’s playfield is making from being a war zone to a safe place with a huge influx of sports lovers. He however hopes that Gurez gets attention for sightseeing, and adventure sports like trekking and rafting as well.

Fayaz Khan, a tournament organiser, says that even a snow cricket tournament was organised in Dawar, Gurez during the winter season in which more than 10 teams of the Gurez valley participated.

“The 12-day long tournament was played on a snow-covered field in minus 10 degrees temperature,” he said.

Every cricket match being held there is witnessing a huge crowd of supporters cheering their favourite teams and appealing to the administration to conduct more such events and promote winter tourism in Gurez.

Bagtore’s Mohammad Jabbar, an elderly, says that the Tourism Department is now planning to open border tourism and Gurez is the prime location on the list prepared by the Department. (Kashmir Observer)