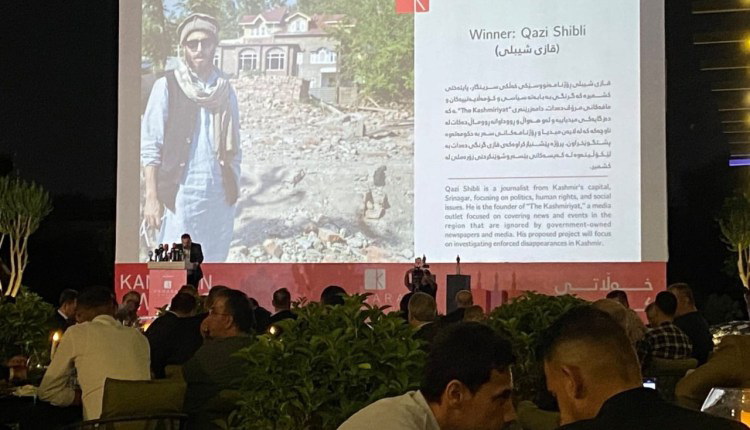 The award is given by Metrography based in Iraq, in the memory of Kamaran Najm, a photojournalist who went missing after he was abducted by ISIS militants on June 12, 2014, shortly after he was wounded while covering the fighting between ISIS and Kurdish forces near Mullah Abdullah, Iraq.
Qazi Shibli was nominated for the award by George Henton, a British journalist and documentary filmmaker, Asos Hardi a Kurdish and Iraqi journalist, and Emily Garthwaite, a renowned British journalist in April, and on June 12, Qazi Shibli was declared the winner of the annual awards.
Pertinently, Qazi Shibli was booked under the Public Safety Act in Kashmir after being summoned to a local Police Station after reporting on the preparations for the abrogation of Article 35A in July 2019.
He was again arrested in July 2020 after he reported a story on a fake encounter in Shopian.
In his acceptance speech, Qazi Shibli said, “As I go on with this acceptance speech, I think it’s incumbent upon me to mention the names of my colleagues who currently languish in jail for reporting from Kashmir. The first name would be that of Fahad Shah, who also happens to be a close friend of mine. Fahad’s been in jail for nearly four months, now. Then, there’s Sajad Gul, a young journalism student who was interning with a local media house before he was arrested for reporting. There’s Asif Sultan, who’s among the longest incarcerated journalists in Kashmir. Asif has been in jail since August 2018. And finally, there’s Manan Dar, a young Photojournalist, who’s been in jail since October 2021. Neither are these the first persons to be jailed for “committing” journalism nor will they be the last ones. “
Qazi Shibli was awarded a cash prize of 12,000 USD for the Kamaran International awards for his story ‘The search for the disappeared of Kashmir’.