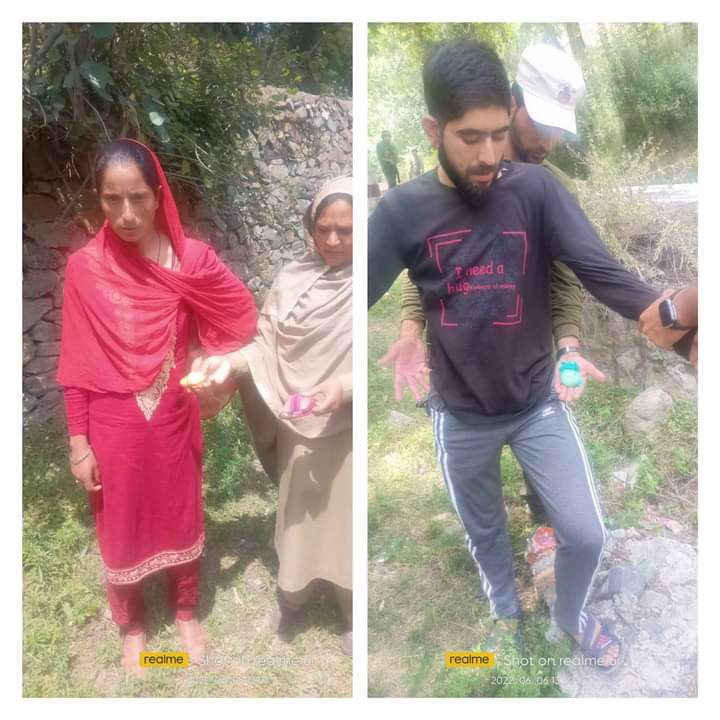 Kupwara, June 06 (KB):In yet another success against the menace of drugs peddling in the district, Kupwara Police along with Army  6 JAK RIF has arrested two people involved in drugs smuggling and peddling in Karnah area of the district.
Police spokesperson as per a statement issued here to Kashmir Bulletin — KB said that, Acting on a specific information that a lady drug smuggler namely Razia Begum alias Bulbul wife of Zakir Hussain Shah and her acquaintance Aftab Ahmad Shah son of late Altaf Ahmad Shah , both residents of Takiya Bahadurkote are on way in Cheterkote area to sell narcotics among youth of Karnah, a  joint  naka was established by Incharge Police Post Teetwal G M Bhat including lady Police officials & local Army unit 6 JAK RIF in presence of  local Executive Magistrate Chamkote.
During naka checking the duo  was apprehended and heroin like substances weighing 35 grams & 43 grams respectively was recovered from their possession. FIR under relevant sections of NDPS Act has been registered in Police Station Karnah and investigations taken up.
Pertinent to mention here that husband of the lady drug smuggler and her two brothers are already in jail for their involvement in narcotics smuggling from across the LoC.
The arrest of the lady is a big breakthrough for Police as she is suspected to be deeply involved in cross LoC smuggling of the narcotics in Karnah area of the district, reads the statement.