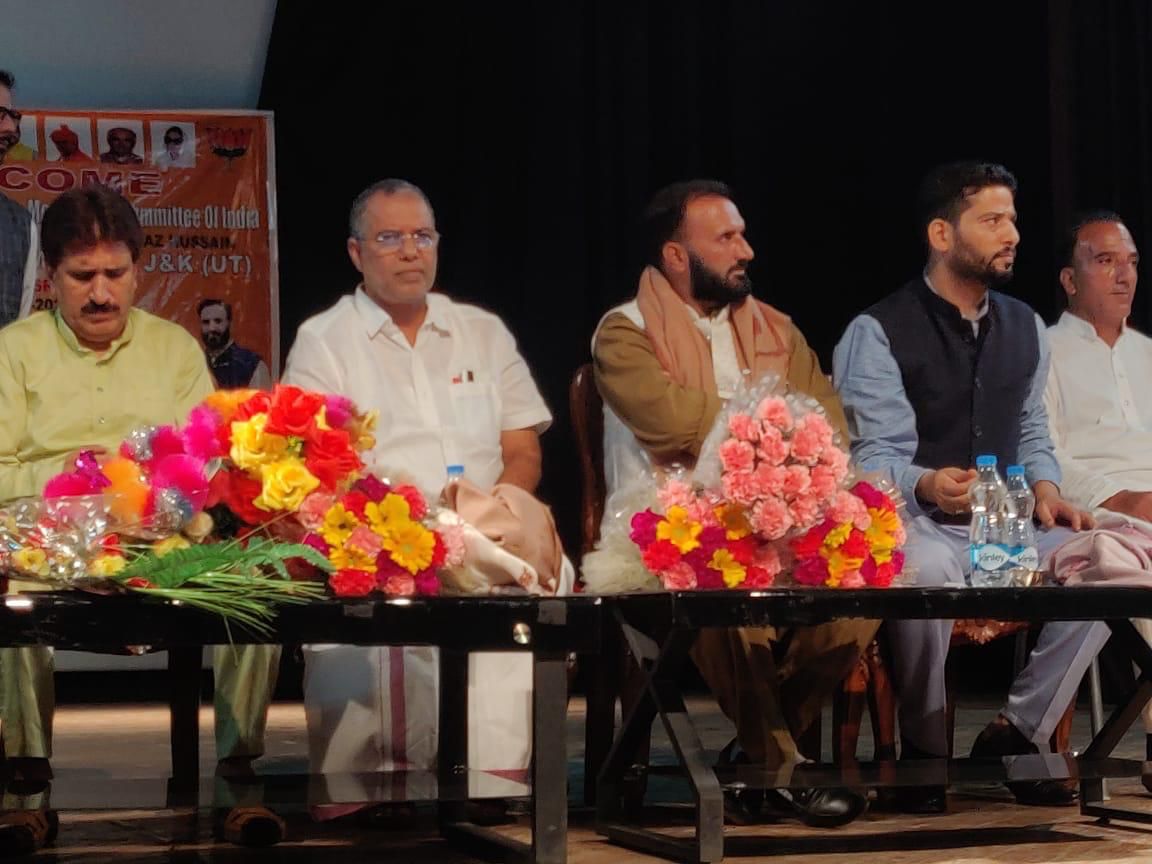 Says Subsidy on Haj is Haraam, Muslims should have Quran in one hand, computer in another;
Adresses impressive function at Tagore Hall, Minority Morcha felicitates HCoI chairman, Member Er Aijaz Hussain
Srinagar, Jun 17 (KB): Chairman Hajj Committe of India (HCoI) AP Abdul Kuttay who is on his maiden two-day visit to Kashmir, today said post Article 370 revocation, Kashmir has seen a massive development and the region has witnessed a peaceful atmosphere besides there is a huge infrastructure boom.
As per Kashmir Bulletin, addressing an impressive function at Tagore Hall Srinagar,    the chairman HCoI said that poat article 370revocation, Kashmir has been wtnessing a  peaceful atmosphere that thas paved way for development, peace and infrasturcture building. The function was organised by BJPs Minority Morcha headed by Sheikh Bashir.
He said Haj related infrastructure has seen a massive overhaul and Hajis are feeling releived after being handled smoothly and there have been Hassle free pilgrimage this year from all states and UTs of India including Jammu and Kashmir. He also stated that JK LG Manoj Sinha led administration was on the path of peace, development and prosperity in JK and people have lauded his role in governance. The chairman HCoI was accompanied by Member HCoI Er Aijaz Hussian who were facilitated in a glitterig function  at Tagore Hall.
Er Aijaz while speaking on the occasion ecpressed his gratitude to Chairman HCOI for conducting maiden and extensive  tour to Srinagar to review the developmental measures related to Haj infrasturcture and other works.
Earlier, yesterday,  the Chairman HCoI interacted with the staff at Hajj house where besides Er Aijaz Hussian,  JK Hajj Committee CEO dr Abdul Salaam was also present, who briefed  the chairperson about a series of steps taken by the Hajj committee of JK for the smooth functioning of the Hajj house, facilities  available for the of pilgrims from Srinagar to Saudi Arabia. It is pertinent to mention that chairman Hajj  Committe of India has arrived in Srinagar for the first time to review and take stock of the arrangements available  at the Hajj house. Interacting with the group of Hajj pilgrims from Habba Kadal, the chairperson sought their feedback on preperations available  and welcomed their suggestions. He also interacted with the staff at Hajj house and assured them all possible support and help. He said that subsidy on Hajj is Haraam, BJP is sending Muslims on halaal Haj for the first time. He said that Muslims should have Quran in one hand and computer in another.
The chairperson HCoI assured the Hajj house staff that all the necesary gadgets and other facilities  will be put in place at Haj house further besides other upgradtion work  will also be started—(Kashmir Bulletin)
SendShareTweetShareSendScan