Share on WhatsAppShare on Facebook
“GUSTAKH RASULON KI EK HI SAZA SAR TAN SE JUDAA, SAR TAN SE JUDA”, shouted the angry protestants who came on roads. We demand strict action against the accused, he should be imprisoned for lifetime or should be hanged to death; said the protestors 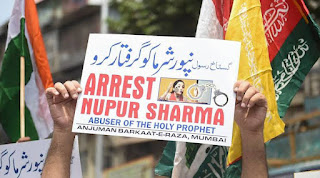 Srinagar, 09 June (KB): Blasphemy remarks on our beloved Prophet Muhammad ﷺ, massive protest and shutdown observed across Kashmir valley. Common people, prominent islamic scholars as well as political leaders from all over valley openly condemned and demanded strict action against accused.
As per the information gathered by Kashmir Bulletin–(KB), states that massive protests and rallies were taken out from different parts of Kashmir valley, and demanded strict action against the accused persons.
“The angry prostents were holding “banners”, in their hands and were also shouting slogans as; “Gustakh Rasulon ki ek hi saza sar tan se judaa sar tan se juda”. Such protests were held all over the valley and everyone was demanding action against the accused.
“We can tolerate anything about us, but can’t tolerate anything about our Prophet ﷺ. Islam never teaches speaking against any religion. We will keep protesting until the accused persons gets arrested”, said a group of women while protesting at Badarwah.
We cannot bear the arrogance that has been done to the glory of the coolness of our eyes, the beating of our hearts, Prophet Muhammad ﷺ, the Messenger of Allah.It is not only today, it has been done again and again that the honor of our beloved Prophet ﷺ has being insulted. We Muslims have gathered here, to protest against the accused and we want him to be hanged to death as soon as possible”, said another protestant belonging from Bandipora.
Meanwhile, many political leaders as well as political parties also protested against the shameful incident. This includes; The Jammu & Kashmir National Conference (JKNC), Mehbooba Mufti, Altaf Bukhari and Peerzada Mohammad Shafi Shah Urf Babbar Sher.
Moreover, “some of the prominent islamic scholars also spoke about the blasphemous remarks on Prophet Muhammad ﷺ, which includes, Molana Abdul Rasheed Dawoodi Sahab, Maulana Naqeeb Sahib and Maulana GH Rasool Hami Sahib etc”. (Kashmir Bulletin–KB)
Related:  Elections in J&K expected to be held in Mar-Apr next year: BJP’s Ashok Koul
SendShareTweetShareSendScan