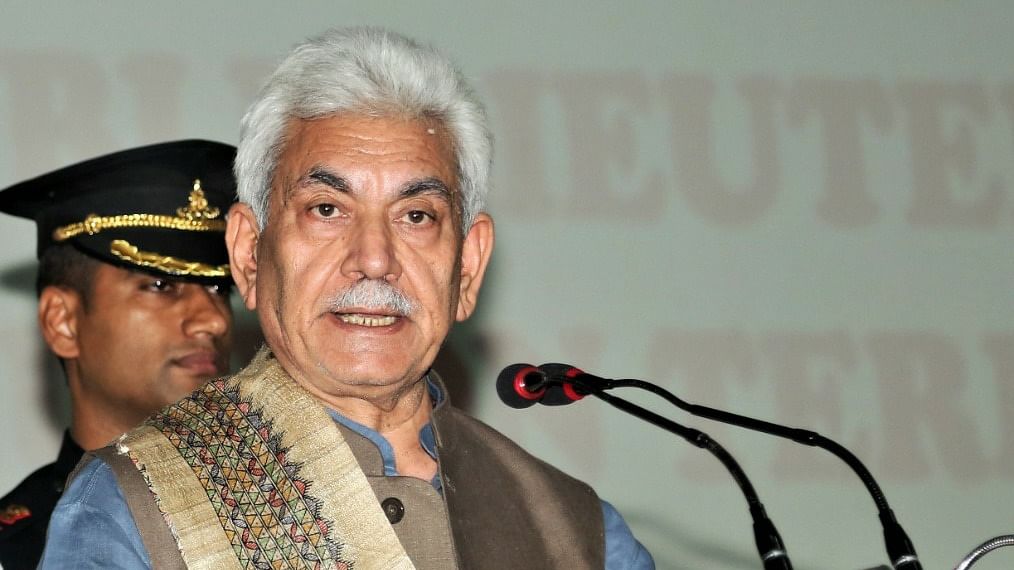 Srinagar: Lieutenant Governor Manoj Sinha on Thursday dedicated revamped Sher-i-Kashmir Indoor Sports Complex at Gogji Bagh, Srinagar to the sportspersons. He also unveiled the calendar of Sports Activities 2022-23 under the “My Youth My Pride” Campaign, on the occasion.

Pertinently, the Indoor Sports Complex which was badly affected during 2014 floods has been modernized with top of the line facilities for sportspersons. Its renovation was completed at a cost of Rs 14.76 crore by the J&K Sports Council under JKIDFC Languishing Projects and has facilities like Multi-activity playing area, Taekwondo hall, Basketball Court, outdoor Gymnasium, besides all other modern amenities.

Speaking on the occasion, the Lt Governor congratulated the winners and participants of the Khelo India Youth Games which recently concluded in Haryana.

“Truly inspired by the heart-warming performance of our athletes in the recently concluded Khelo India Youth Games in Haryana. J&K has improved its medal tally and now our players with a strong winner’s instinct are aiming for gold in upcoming Asian and World Championships”, the Lt Governor said.

Noting that Sports ecosystem in the UT has been made world class under the guidance of Hon’ble Prime Minister Shri Narendra Modi, the Lt Governor observed that J&K is inching closer towards achieving excellence in sports. Our promising sportspersons are being given maximum opportunities for training in India and abroad, he added.

The Lt Governor observed that the youth of Jammu and Kashmir now have access to ample opportunities based only on merit and skill with absolute transparency.

He further said that the government has ensured a secure and attractive career track for medal winners in the National as well as International Games.

Speaking on the sports policy rolled out for the overall benefit of sportspersons and securing their future, the Lt Governor said that for the first time after 2014, at least 200 sportspersons will get government jobs in coming months. Our objective is to create maximum incentives for talented sportspersons, he added.

The Lt Governor further observed that owing to enhanced availability of upgraded sports infrastructure, now notable sporting events are being organized in the UT and our talented youths are getting the opportunity to play as well as learn from the famous players.

“Senior National Archery Championship was held in Jammu in March this year and 1014 female and male players including 50 international level players participated in it. We are all set to organize 16 more national and international tournaments this year on the same grand scale. Soon, National Table Tennis Championship, Senior Volleyball Championship will be organized in this indoor stadium in which our youngsters will get a chance to show their talent and it will also be a great opportunity to learn in the presence of international players”, he added.

It was further informed that promising gymnast Bavleen Kaur from J&K will participate in the Asian Games and renowned fencers, Shreya and Vishal will represent the country at the World Championships. Eight athletes from the UT including Aqsa Gulzar, Komal Dhiman, Suhaib Jeelani, Ravees Ahmed, Saqib, Karan Chopra, Adil Manzoor, Bilqis Maqbool will represent the country in the Pencak Silat Championship to be held in July next month.

The Lt Governor noted that under the guidance of Hon’ble Prime Minister, the industrial sector is witnessing massive inflow of investments and that will translate into a host of entrepreneurial and employment opportunities for our enterprising youths.

Highlighting the UT government’s consistent efforts towards empowering the youth, the Lt Governor said that more than a dozen schemes are being run under ‘Mission Youth’ to make our youth capable and future ready. At least 5 young boys and girls have become entrepreneurs in every panchayat and are fulfilling their dreams through Mumkin, Rise Together, AVSAR and Tourist Village Network programmes.

The Lt Governor also called for collective efforts of administration and people to uproot the evil of Drugs from the society so that youngsters can channelize their energies and achieve big in life.

“On one hand the government is giving wings to dream of youth while on the other, the enemies of peace are making nefarious attempts to misguide them. I urge our young generation to dedicate themselves in shaping J&K’s future”, the Lt Governor said.

Junaid Azim Mattu, Mayor SMC, while speaking on the occasion, congratulated the sportspersons of the region for the indoor sports facility.

Nuzhat Gul, Secretary, J&K Sports Council, gave a detailed briefing about the achievements made so far, besides various initiatives being taken for promoting sports in the UT.

Sports enthusiast of Rural, Tribal, Urban and Border areas, by way of a signature campaign, expressed their gratitude to the Lt Governor led UT Government for conceptualizing and implementing “My Youth My Pride” campaign and giving opportunities to the players at grass root level to excel in sports.

Young Sportspersons demonstrated their skills and abilities in various sports disciplines, besides staging impressive March Past to mark the occasion.