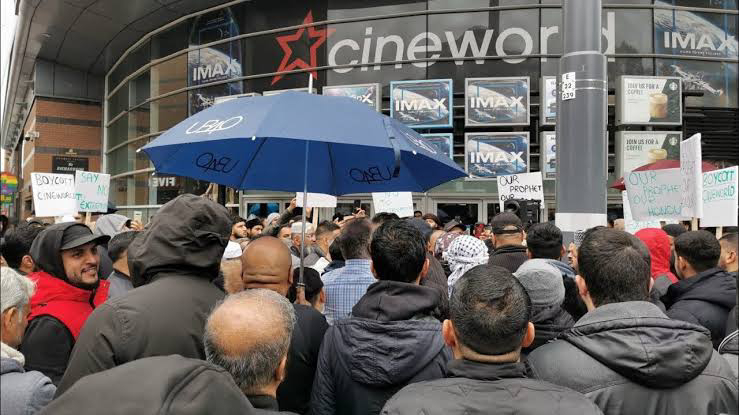 Protests rocked England prompting many cinema halls to withdraw the screening of a controversial film based on the daughter of Prophet Muhammadﷺ.

Daily Mail reported that hundreds of demonstrators turned out in Bradford, Bolton, Birmingham, and Sheffield to protest venues showing `The Lady of Heaven’.
The movie was released in the UK over the Jubilee weekend but has been pulled by Cineworld from all its branches after staff faced crowds of protesters demanding it was removed from circulation, the London daily added.
The movie’s executive producer Malik Shlibak called the decision ‘unacceptable’. He rejected the criticism that the film is blasphemous, terming it as ‘non-sense’.
The response at Cannes was “overwhelmingly positive,” Shlibak told Variety. The producer, who said he has received death threats “for years” over his work, added that while he was disappointed that Cineworld pulled the film, “I’m not feeling negative overall.”
A trailer for the film, posted in December 2020, has been viewed more than 3 million times on YouTube, but comments have been turned off.
In its letter about the film, the Bolton Council Of Mosques said: “It is underpinned with a sectarian ideology and is blasphemous in nature to the Muslim community. It grossly disrespects the Prophet Muhammad (peace be upon him) in many ways and is deeply disturbing to every Muslim.”
A spokesperson from Cineworld told the publication, “Due to recent incidents related to screenings of The Lady of Heaven, we have made the decision to cancel upcoming screenings of the film nationwide to ensure the safety of our staff and customers.”
Meanwhile, a petition on Change.org titled “Remove The lady of Heaven from UK cinemas” [sic] has so far garnered over 122,000 signatures.
“This film has been created to cause heartache for all Muslims as well as spread false information on Islam,” reads the petition.
“The film directly disrespects Prophet Muhammad who is depicted by an actor, deeply shocking and disrespectful to the best of creation. It is also a deeply racist film with all the main negative characters being portrayed by black actors. Furthermore, it also portrays the companions of our Prophet Muhammad PBUH in a bad manner”.
“We demand the cinemas to remove this film from their screens and understand that airing it will cause protests throughout the country and will not be accepted by Muslims,” the petition concludes before linking to a review of the movie titled “pure, unadulterated sectarian filth.”
The film is still being screened by the Vue theater chain. A spokesperson for Vue told the outlet, “Vue takes seriously the responsibilities that come with providing a platform for a wide variety of content and believes in showcasing films of interest to diverse communities across the UK Vue will only show a film once the BBFC (the independent British Board of Film Classification) has assessed and rated a film. ‘The Lady of Heaven’ has been BBFC accredited and is on show in a number of our cinemas. Decisions about how long a film remains on the show are taken on a site-by-site basis and based on a variety of commercial and operational factors.”